Last time out, we looked at the current composition of each conference and where its members were in 2009 (the season before the realignment tremors began). Now I want to look back a little further, to the turn of the century. Why the year 2000? That represented the swan song for the Big West as a football conference and was the final season before the Sun Belt began playing football. As we did last time, we’ll start with the Power 5 (P5) conferences.

Back in 2000, the ACC was a nine-member league. Remember those days? Eight of those nine teams remain in the conference (Maryland joined the Big 10). The ACC’s other six members were in the Big East (Boston College, Miami, Pittsburgh, Syracuse, Virginia Tech) and Conference USA (Louisville) back in 2000. 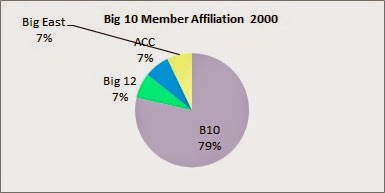 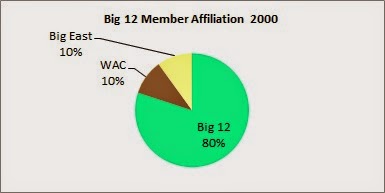 The Big 12 had twelve members in the year 2000, including the eventual national champion. Eight of the original twelve remain, and the two teams they have added were playing in the Big East (West Virginia) and WAC (TCU) in 2000. 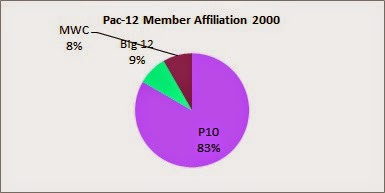 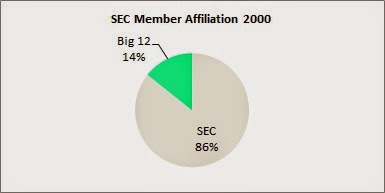 The SEC had twelve teams in 2000. Both of its new members (Missouri and Texas A&M) played in the Big 12 that season.

Now we can turn our attention to the Group of 5 (G5) conferences to see where their members were playing at the turn of the century. 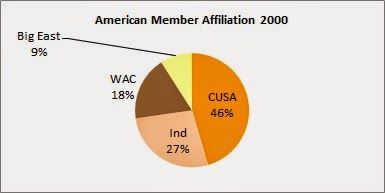 Nearly half of the teams in the American were in Conference USA in 2000 (Cincinnati, East Carolina, Houston, Memphis, and Tulane). Three teams were not part of any conference and were relatively new to IA football (Connecticut, South Florida, and UCF), two were in the WAC (SMU and Tulsa), and one was in the Big East (Temple). Temple was of course booted from the Big East, wandered through life as an independent, was scooped up by the MAC, and finally rejoined the Big East before it was completely torn asunder and for all intents and purposes, rechristened the American. 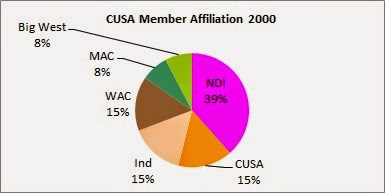 The current version of Conference USA is a true melting pot. Its current membership was in vastly different places in 2000. Southern Miss and UAB are the only two current conference members who were also members in 2000. Five members were not even playing IA football in 2000 (Florida Atlantic, Florida International, Old Dominion, Texas-San Antonio, and Western Kentucky)! Two current members were independents (Louisiana Tech and Middle Tennessee State), although they would join the WAC and Sun Belt respectively before joining Conference USA. Two teams were in the WAC (Rice and UTEP), one was in the MAC (Marshall), and one was even in the Big West (North Texas). 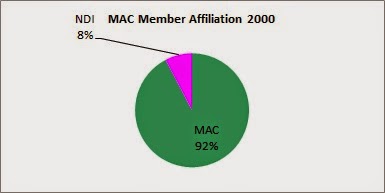 Of the MAC’s current thirteen members, the only one that was not a part of the league in 2000 was Massachusetts, which had yet to move up to IA football. 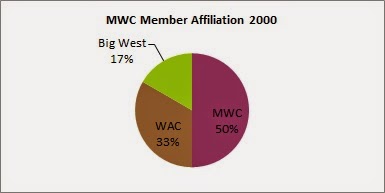 Of the twelve current Mountain West Conference members, half were part of the league in 2000. In fact, these six teams (Air Force, Colorado State, New Mexico, San Diego State, UNLV, and Wyoming) were original members when the league formed by breaking away from the WAC. Speaking of the WAC, four current members (Fresno State, Hawaii, Nevada, and San Jose State) were playing in the WAC in 2000. The other two current members were both involved in the final season of the Big West (Boise State and Utah State). In fact, Boise won the final Big West football championship, giving them their second conference title as a IA program.

The Sun Belt did not exist in 2000, so it makes sense that all its members came from somewhere else. More than half of its current membership was not playing IA football in 2000 (Appalachian State, Georgia Southern, Georgia State, South Alabama, Texas State, and Troy). Three current members watched as the Big West faded away (Arkansas State, Idaho, and New Mexico State). Who knew Arkansas was in the west? I guess a school from the state was once in the Southwest Conference. And last, but not least, the two Louisiana schools (Lafayette and Monroe) were independents in 2000.

And finally, the let’s look at the Independents. 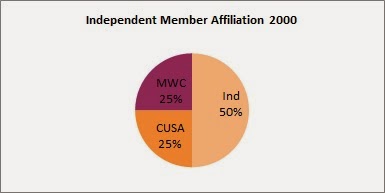 Even hard-core college football fans may have forgotten about this one. Yes, for a brief time period, Army was a conference member. The Black Knights played football in Conference USA from 1998-2004. They never won more than two conference games in any season before returning to Independent status. Navy and Notre Dame were independents in 2000 and BYU was a member of the Mountain West Conference.
Posted by matt at 4:34 PM