The Degenerates Guide to the 2014 Season: The Best and Worst Home and Road ATS Records

A few weeks ago in a series of posts, I looked at the home and road performance of every IA team in conference play since 2005. Now I am going to take another look at home and road performance, but this time based only on the spread. If a team loses, but covers, that is counted as a win in this analysis. Let’s get started with the best home teams since 2005. These ten teams have posted the best home conference winning percentage Against the Spread (ATS). For bookkeeping purposes, ties are not counted as half-wins and half-losses, but are instead excluded. 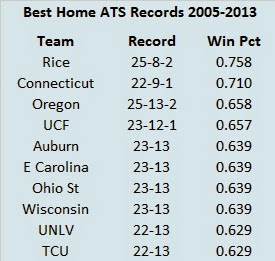 The top two teams in home ATS performance may come as a surprise to a few readers. But then again, maybe not. As you may remember, Rice and Connecticut were two teams that saw some of the biggest difference between their home and road performance in actual wins and losses. I am a little surprised Oregon makes this list as I thought they would be a shade over-valued when playing at home considering they have all the criteria of a team the betting public favors. They have been an elite team for the past few years, have a sexy offense, and feature avant-garde uniforms. Other minor surprises on this list include former Conference USA standouts UCF and East Carolina. And which teams have been deplorable at home? 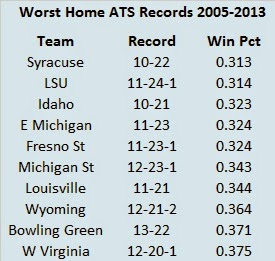 If you have been betting on Syracuse at home over the last decade, you would have been better off buying some scratch offs. The least surprising team on this list is LSU. I chronicled the magic and mystery that is Les Miles against the spread here. It probably doesn’t mean anything since such a small number of college football teams play in a dome, but Idaho and Syracuse play their home games indoors and have struggled mightily against the number there. The other two teams in this study who extensively played in domes were Tulane and Minnesota. Tulane’s home ATS mark is 13-19 (.406) and Minnesota was 8-8 before moving into their new outdoor stadium (where they have also covered exactly half the time). Tulane is set to open their own outdoor stadium this season leaving Syracuse and Idaho, along with IA neophytes Georgia State and Texas-San Antonio, to represent the last bastion of dome teams. Some more tidbits on teams that have struggled ATS at home: Before hiring Tim DeRuyter, Fresno State was even worse. Under Pat Hill from 2005 to his firing in 2011, the Bulldogs went just 6-20-1 (.231) ATS at home. Michigan State’s appearance on this list may be surprising to some. A significant portion of their poor record can be laid at the feet of noted psychopath John L Smith (1-7 home ATS mark), but the Spartans have not been as strong as one would think ATS at home under Mark Dantonio (11-16-1). Now, which teams have been road warriors? 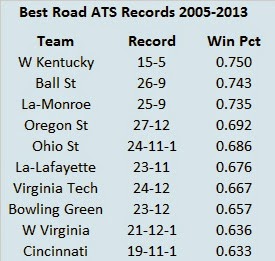 Western Kentucky, a team that lost its first 18 games overall and first ten conference games as a IA member holds down the top spot. Joining the Hilltoppers as the other two teams to post ATS road marks greater than 70% are fellow mid-majors Ball State and Louisiana-Monroe. All told, three teams that spent their entire existence for the 2005-2013 time period in the Sun Belt appear on this list (the two Louisiana schools and Western Kentucky). It is also worth noting that two teams that appear on this list also posted very low home winning percentages ATS (Bowling Green and West Virginia). In fact, of the ten best road teams, all except Ohio State and Virginia Tech posted losing ATS marks at home. Speaking of Ohio State, they are the only team to appear on the best home and best road ATS lists. And finally, I present the teams with the worst ATS road records. 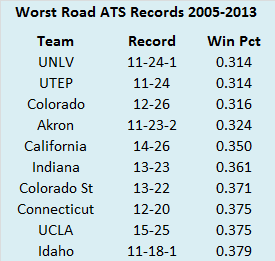 The Runnin’ Rebels from UNLV own the distinction of posting the worst ATS road winning percentage. If you lived in Vegas, would you ever want to leave? Two teams from Colorado struggled when they left the thin mountain air. Of course, Colorado and Colorado State didn’t exactly light things up at home, posting a combined 36-36-1 ATS mark on their home fields. Idaho is the only team to appear on the worst home and worst road ATS lists indicating they are a bad bet no matter where they play.

Before we conclude, here are a few more ATS tidbits. It appears the homefield advantage has been priced out of the Smurf Turf. Boise State has posted the best overall home record since 2005 (34-2 versus conference foes), but their ATS mark in that span is only 17-19. The Broncos have been particularly atrocious the past few seasons. After going 9-3 ATS in home conference games from 2005-2007, the Broncos are just 8-16 ATS in those contests since 2010 (including 2-10 since joining the Mountain West in 2011). The public is now giving Boise too much credit when they play at home. South Florida has also been particularly atrocious at home recently. The Bulls have gone just 2-14 ATS at home since 2010, first under Skip Holtz (1-11) and then under Willie Taggart (1-3) after posting good numbers under Jim Leavitt (10-5-1). As for teams heading in the opposite direction, Baylor is 16-7 ATS at home in the Big 12 since Art Briles took over in 2008 after posting a 3-9 ATS mark in their final three seasons in Waco under Guy Morriss. Baylor is also a sizzling 11-1 ATS at home since 2011. Finally, I want to shed some light on one of the best moneymakers of the last decade, who also happens to be my favorite coach, and is perhaps the best coach in NCAA history. Under Bill Snyder, the Kansas State Wildcats have gone 18-7 ATS at home (would rank second in home ATS win percentage) and 16-7-1 ATS on the road (would rank fourth in road ATS win percentage). Those are phenomenal numbers, especially over such a relatively large number of seasons. That’s all for now. Stay tuned for the next post where we’ll look at the teams with the biggest different between their home and road ATS performance.
Posted by matt at 6:10 PM