The Degenerates Guide to the 2014 Season: Who Derives the Most ATS Benefit from Playing at Home 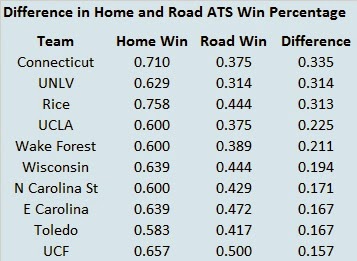 Connecticut tops the list for biggest difference between their home and road ATS winning percentage. Considering they have covered more than 70% of the time in their home games, this is not terribly surprising. Of the teams with the biggest difference between their home and road ATS winning percentage, only Toledo covered less than 60% of the time at home. UCF is the only team on this list that did not have a losing ATS record on the road. Most of the teams on this list, outside of UNLV, have experienced a modicum of consistent success since 2005. Connecticut, UCF, Wake Forest, and Wisconsin all played in BCS bowl games. In addition, six teams (the aforementioned four plus East Carolina and Rice) won at least one conference title in that span. Now what if look at the ratio instead of the difference? 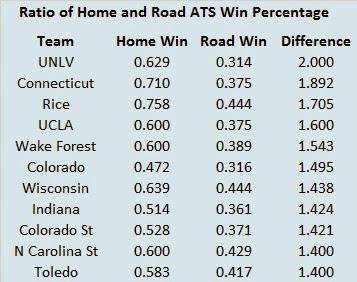 Most of the same teams appear on this list. The only new additions are Colorado, Colorado State, and Indiana (with East Carolina and UCF falling off the list). The three newbies, have relatively pedestrian home ATS marks (Colorado even has a losing record), but make up for it be being even worse on the road. With the new additions, we see a relative drop off in team quality. Colorado has not advanced to the postseason since 2007, ditto for Indiana, and Colorado State has just three bowl appearances since 2005. At the top of the list, UNLV has amazingly covered twice as often in Sin City as they have when leaving Las Vegas. And what about when we look at Composite Homefield Advantage (CHA)? 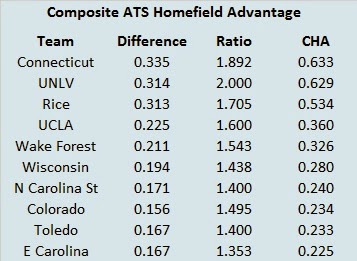 No new teams join the list when we use CHA. Connecticut, UNLV, and to a lesser extent Rice stand out as deriving the largest benefit when playing at home versus playing on the road. How does this ATS list compare to the standard won/loss difference from the post back in July? Eight teams appeared in at least one top-ten metric (difference, ratio, or composite) when looking at standard won/loss record and ATS record. Those teams are Connecticut, Colorado, Indiana, Rice, UCLA, UNLV, Wake Forest, and Wisconsin. These eight teams have been significantly better at home than on the road when evaluated by either their overall won/loss record or their ATS record.
Posted by matt at 5:12 PM