An Ode to Bill Snyder 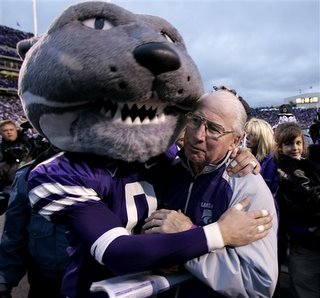 Last Tuesday, the architect of one of the greatest turnarounds in NCAA football history announced he would be coaching his last game on Saturday. In a Gipper-esque game that could not have been scripted any better by Hollywood, Bill Snyder went out a winner against Missouri. He gave a speech, hugged Willie the Wildcat, and was carried off the field by his players. The last 2 seasons have been disappointing in Manhattan, but that should not detract from the job Snyder has done since taking over the moribund program in 1989. I fell in love with Kansas State in the early to mid-90’s; probably around 1994. Being a Wake Forest football fan, I needed another team to root for during college football season. Being a fan of sports history even then, I was drawn to this team that had once been terrible and was now stomping on the throats of the bullies who formerly took their lunch money. I suppose deep down, the real reason I rooted so hard for Kansas State was that if it could be done in Manhattan, Kansas, it could be done in Winston-Salem.

When Snyder arrived on campus in 1989, after serving as Hayden Fry’s offensive coordinator for 10 seasons at Iowa, the Wildcats were coming off consecutive winless seasons (0-11 in 88 and 0-10-1 in 87). They had gone to one bowl game in their history, an appearance in the Independence Bowl in 1982. Besides 1982, their last season with a winning record was 1970. Their previous (and only) conference championship had come in 1934 under head coach ‘Pappy’ Waldorf. Waldorf only coached the team for the 1934 season, and after his departure the highest career winning percentage for a Kansas State coach was .467 by his successor Wesley Fry. Kansas State also had the worst historical winning percentage of any Division I team in 1989. Worse than Rutgers, worse than Northwestern, worse than Vanderbilt, worse than Wake Forest, worse than Temple,… etc. To say he was walking into a less-than enviable position would be an understatement.

His 1989 team didn’t exactly set the world on fire. Their only victory was over North Texas, a team that was not Division I at the time. They also lost to non-Division I Northern Iowa and finished 0-7 in the Big 8 Conference. In 1990, the Wildcats improved to 5-6. In the process, they won their first conference game since 1986 as they finished 2-5 in Big 8 play. 1991 was Kansas State’s breakthrough season. The team finished the season on a 3 game winning streak and had a final record of 7-4 (they did not play in a bowl game since 2 of their wins were over non-Division I teams at the time). They also posted a winning record (4-3) in Big 8 play. In 1992, the team was hit hard by graduation and took a step back finishing at 5-6. 1993 marked the beginning of more than a decade of excellence. Kansas State finished 9-2-1 and won the first bowl game in the program’s history. Kansas State would go on to win no fewer than 9 games every season until 2001 and appear in a bowl game every year until 2004. The zenith of Kansas State’s success occurred between 1997-2000. During those 4 seasons, the Wildcats won 11 games each year and finished with a combined record of 44-7. They won 3 bowl games, 2 Big 12 North titles, and at one point in 1998 were ranked number one in the nation. 2001 saw the Wildcats regress to 6-6, but they rebounded the next two seasons winning 11 games in both 2002 and 2003. The 2003 season was special for several reasons. Kansas State beat Nebraska in Lincoln for the first time since 1968. Then on December 6th, they upset top ranked Oklahoma to win the Big 12 championship. This was Kansas State’s first conference title since 1934.

Snyder has been roundly criticized for his charmin-esque non-conference scheduling. Although he has scheduled his fair share of North Texases and New Mexico States, his teams have played some solid non-conference games in recent years including Fresno State, Cal, Marshall, Southern Cal, and Iowa. In fact, Kansas State is the last non-Pac 10 team to defeat Southern Cal. In fact they own a 2 game winning streak over the Trojans having beaten them in 2001 and 2002.

Clearly, Bill Snyder is a Hall-of-Fame coach. He did more than resurrect a downtrodden program, he built it in his own image. He is a meticulous hand-on coach who goes so far as to make his players set their watches 5 minutes ahead so they will always be on time. During the season he sleeps about 5 hours per night and burns the midnight oil breaking down film. His numbers speak to his success. His lifetime record is 136-68-1. In conference play it is still a stellar 75-53-1. Furthermore, many of his assistants have gone on to become successful head coaches. Among them are Bob Stoops, Mike Stoops, and Mark Mangino. He may never have won a national championship, but then neither did Bo Schembechler. I’ll close this piece with some praise from the immortal Barry Switzer. While he may not know much about airport security, he does know football. "Bill Snyder isn't the coach of the year, and he isn't the coach of the decade, he's the coach of the century."

Nicely done. Thank you for sharing it with others.

Well done. Definetely on the money with this once. Thank you for sharing it with all us kstaters.