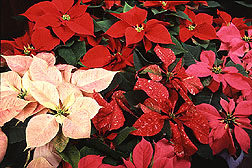 Fun fact: The poinsettia is named after Joel Robert Poinsett, the first United States ambassador to Mexico. Ah, the wonders of wikipedia.

TCU comes in riding high on a 7 game winning streak. The Horned Frogs fell off the national radar after consecutive losses to BYU and Utah at mid-season. During those 7 games, the Horned Frogs have been challenged only once—in a 27-21 road win over New Mexico. In that game, normally efficient Senior quarterback Jeff Ballard completed only 6 of his 16 pass attempts for a paltry 25 yards. Besides Ballard, the strength of the TCU team is their rushing attack (which averages 194 yards per game and 4.56 yards per carry) and their stifling defense (12.8 points allowed per game). TCU’s pass defense is good, but their run defense is outstanding. They held opponent’s to 68 yards per game and only 2.4 yards per rush.

If the Frogs want to win this game, they’d better hold that line. Northern Illinois is far from a one-dimensional team, but they are certainly carried by their star running back Garrett Wolfe. Wolfe had over 1900 yards rushing and averaged over 6 and a half yards per rush. Wolfe is an exceptional player, but he is far from Super Man. He was actually bottled up in 4 games (one third of the schedule). He averaged under 2 yards per rush against Western Michigan, under 3 against Temple (!?), exactly 3 against Iowa, and under 4 against Toledo. Context and sample size are not issues in these games. The Huskies were very much in the games they lost to Western Michigan (by 2), Iowa (by 10), and Toledo (by 4), and Wolfe had at least 15 carries in all 4 contests. The Horned Frog defense will contain Garrett Wolfe and put the onus of the game on quarterback Phil Horvath. Horvath is a solid player, but will not be able to consistently move the ball against a TCU defense that consistently holds down the running game.

The one-wild card that may aid Northern Illinois is their return game. At least their punt return game. The Huskies averaged nearly 12 yards per punt return (good for 26th nationally). Of course, TCU only allows a shade over 5 yards per return (15th in the nation). If the Huskies can break a return or two to shake up the field position they will have a chance.

Prediction: The Huskies will keep this game close (and definitely cover than 12-12.5 point spread), but their lack of a good pass defense (opponents have completed 64% of their passes and thrown only 7 interceptions) and inability to consistently move the ball will be their downfall.
Posted by matt at 4:05 PM