We have finished out sojourn through the BCS leagues and now we move to the mid-majors. First up is Conference USA. To see how last year's projections performed, follow this link. 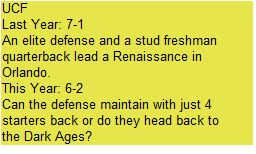 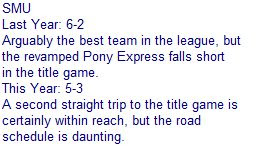 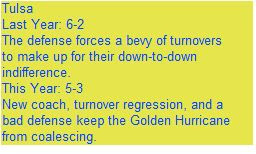 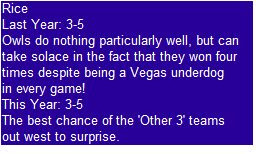 Conference USA and the BCS
Say what you will about the BCS and its exclusionary practices, but one of the five major bowls (Fiesta, Orange, Rose, Sugar, and the BCS National Championship) has had at least one of their participants be from a non-BCS or mid-major conference each of the past 5 seasons and 6 out of the last 7. However, those participants have all either come from the WAC (Boise or Hawaii) or the Mountain West (TCU or Utah). Despite being as strong and occasionally stronger than the WAC or the Mountain West (top to bottom), Conference USA has yet to have a program rise above the madding crowd and contend for a BCS bowl bid. Since the BCS was formed prior to the 1998 season, only a single Conference USA team has made it through the entirety of the regular season unscathed.

Meanwhile, the WAC and Mountain West have produced a combined 9 unbeaten regular seasons in that span. The WAC has produced an unbeaten team in 5 of the past 7 seasons and the Mountain West has produced 3 consecutive champions with an unblemished regular season record. Conference USA's only unbeaten campaign was produced way back in 1998, by a team with just one bowl appearance since then. Since their meteoric rise in 1998, a season that made household names and millionaires out of Tommy Bowden and Rich Rodriguez, the Green Wave of Tulane have gone a collective 49-92.

Outside of producing undefeated seasons, Conference USA has also had a much more difficult time producing teams that register on the national radar. Compare the dearth of Top-25 teams from Conference USA with that produced by the WAC and Mountain West.

The WAC has produced Top-10 teams the past 2 seasons, while the Mountain West had done it for 3 consecutive years. The only teams to finish in the Top-10 for Conference USA were Louisville (2004) and Tulane (1998).

So that begs the question, is there a team in Conference USA that could potentially topple this decade's worth of mediocrity. There is one. Houston. Now, I certainly am not saying Houston will go undefeated, but the Cougars certainly have a shot, likely the best shot in Conference USA. For starters, they should field the most explosive offense in the conference with the return of quarterback Case Keenum, who missed most of last season with a torn ACL. Secondly, and perhaps most importantly is the schedule. So you don't have to look it up, here it is. 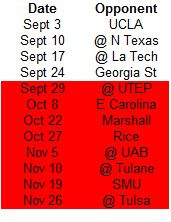 The Cougars 4 non-conference games are all imminently winnable. They get to host a decent, but hardly imposing team from a BCS conference (UCLA) in the season opener. They follow that up with trips to face a Sun Belt (North Texas) and WAC (Louisiana Tech) foe. While the Mean Green and Bulldogs will likely be improved this season, Houston should be favored in both. They return home to close non-league action with a bodybag game against IAA Georgia State. Once league play begins, notice the Cougars do not have to face either of the projected top duo from the East (Southern Miss and UCF). The Cougars will likely be favored in 3 of their 4 road conference games (UTEP, UAB, and Tulane). Not that being favored did them any good the last time they traveled to El Paso. With some good fortune, the Cougars could potentially be unbeaten heading into their regular season finale with division rival Tulsa!

And what of Tulsa, and SMU, and Southern Miss, and UCF? Why can't they harbor dreams of an undefeated season? Unfortunately, the non-conference slate will have Tulsa out of contention for an unbeaten season early as they travel to Oklahoma on opening weekend and then visit Boise State 3 weeks later. Similarly, SMU tangles with both Texas A&M and TCU on the road in September. Southern Miss has things a little easier with trips to Virginia and Navy ranking as their toughest non-conference tests. However, the Golden Eagles have not lost fewer than 4 games in a season since 2003. UCF hosts Boston College in non-league action with a chance for a somewhat marquee home scalp, but they must also travel cross-country to BYU and face Southern Miss on the road once conference play starts,
Posted by matt at 9:41 AM