With just a little over 4 weeks to go before kickoff (29 days) we come to the last of our BCS conference previews. The SEC has produced the last 5 BCS national champions and looks poised to at least send a team to New Orleans for another shot at the crown. To see last year's picks, follow this link. 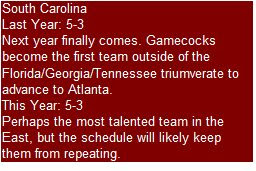 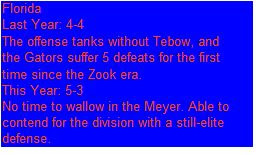 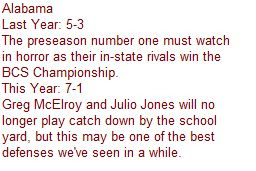 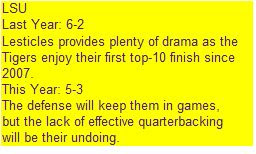 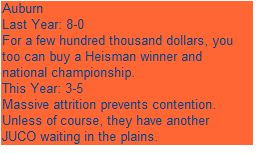 Marcus Lattimore Fever: Catch It
As a Columbia resident, I know first hand the love South Carolina fans feel for Marcus Lattimore. As a freshman, Lattimore was an integral piece of a South Carolina team that won its first ever SEC East title in 2010. In the process of that run, Lattimore became the 12th freshman running back from a BCS conference to top 1000 yards on the ground since 2007. That's pretty good, but hardly elite company. The following table lists all 12 running backs, as well as their rush attempts, rush yards, yards per attempt, and touchdowns. Their ranking in rushing yards, yards per attempt, and touchdowns is also included in parentheses.

Lattimore's ranking among the 12 seems to make him more Simon the Zealot than Simon Peter. Aside from his high touchdown total, he ranked below the median average in rushing yards and is dead last in yards per rush. Of course, some will attribute this to playing in the SEC!. To those folks, I would point out that Michael Dyer (3rd in yards per attempt) and Knowshon Moreno (7th in yards per attempt) also competed in the rough and tumble SEC. So it looks like Lattimore may be a tad overrated. But just to be safe lets look at one more measurable area of a running back's performance. The following table lists those same 12 running backs, only this time with their total receptions, receiving yards, yards per catch, and touchdowns (with their rank among the 12 in parentheses).

Here is where Lattimore equals the hype. His receiving numbers blow away nearly every other running back. LeSean McCoy had more receptions for Pitt, but Lattimore had nearly double his total yardage! Only two other backs averaged more than 10 yards per catch, the aforementioned Moreno and Ryan Williams from Virginia Tech. Williams was also the only back to score multiple touchdowns through the air. While Lattimore is a fine player carrying the football, he is a real game changer snagging passes out of the backfield.
Posted by matt at 3:38 AM