Friends, we have made it to single digits. Just 9 more days and the season is here. Today is the penultimate preview, and the last true 'conference' preview. On Saturday, Statistically Speaking will preview the final four teams, all Independents. To see last year's Sun Belt projections, follow this link. 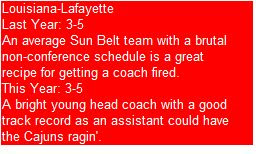 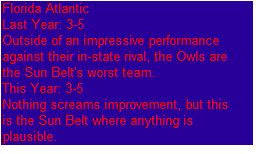 Hard to Come By
Nothing has come easy for the Sun Belt in its 10 years of existence. No Sun Belt team has ever been ranked in the AP poll, the conference has never finished a season with an aggregate winning record, and Middle Tennessee State in 2009 has been the only team to reach double digit wins. The Sun Belt and its member schools typically serve as cannon fodder for BCS programs looking to add another win in the coffers to attain bowl eligibility. But every once in a while, the little guy strikes back. Sun Belt teams have beaten opponents from BCS conferences 12 times. The following table lists those wins in (somewhat) chronological order. 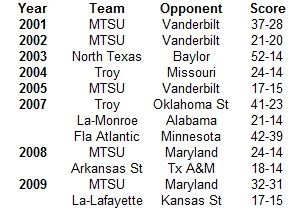 One of the more interesting tidbits from those 12 wins is that Middle Tennessee State owns 5 of them. In addition, those 5 wins have come against a pair of common opponents. In the early part of the decade, Middle Tennessee beat Vanderbilt 3 straight times over 5 seasons. The last loss was especially crushing for Vanderbilt, as it cost them a bowl bid (finished 5-6). More recently, Middle Tennessee has beaten Maryland twice in the past 3 seasons. The only other Sun Belt team with multiple wins versus BCS conference opponents is Troy. The Trojans ambushed a pair of Big 12 teams in 2004 (Missouri) and 2007 (Oklahoma State) at home. Perhaps not coincidentally, the Trojans have not been able to convince a BCS conference team to come to their place since beating the Cowboys.