It's almost here. Less than one week until kickoff. 5 days and counting. Today is the last of the season previews, focusing on the 4 remaining independents. To see last year's independents preview, follow this link.

Wake Up the Echoes
Is this the year Notre Dame finally returns to elite status in college football? Can they reclaim their place as a perennial national title contender under Brian Kelly? The best I, or anyone else can offer now is some conjecture on the matter. I think Brian Kelly is one of the best coaches in college football and stands a great chance at turning the Irish back into an elite program. Of course, that's just an opinion. A better question to ask may be, when was the last time Notre Dame was an elite program? To answer that question, I went back and looked at the SRS rating for Notre Dame since their last national championship in 1988. The SRS rating, or Simple Rating System, is as its name suggests, a simple system for rating college football teams. It takes into account who you beat (schedule strength adjusted) and how bad you beat them (margin of victory is accounted for up to a point). Its probably not the greatest rating system ever designed, but it can give us a quick and dirty idea of how good a team was. Plus, its easily found on a website I frequent anyway, college football reference. Check 'em out sometime. The table below lists the SRS ranking (not rating) of Notre Dame among all college football teams for each season since 1989. I also included the other three current independents (Navy, Army, and BYU) as a frame of reference. Remember, since this is ranking among college football teams, so being lower on the graph is better. 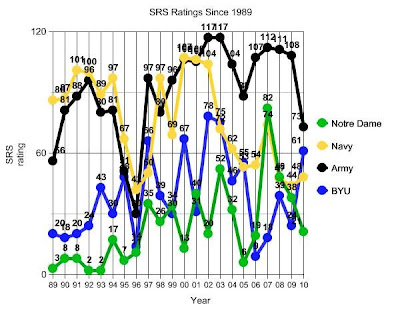