Only 13 more days and 3 more previews to go before the season begins. Today we turn our attention to the Big 10's little brother, the Mid-American Conference. To see how the projections fared last season, follow this link. 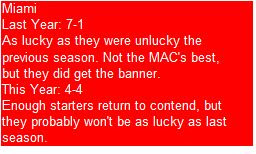 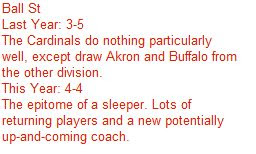 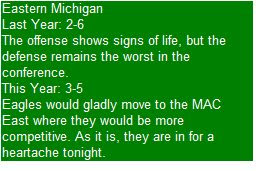 Easy Come, Easy Go
One of the biggest reasons for Toledo's improvement 3-5 in the MAC in 2009 to 7-1 in 2010 was their almost magnetic like attraction to the football when their opponents had it. Toledo forced an amazing 27 turnovers in their 8 league games (after forcing only 10 in 2009). This combined with the relative dearth of their own turnovers (9 in league play) gave them an impressive turnover margin of +18. The Rockets were in the black in turnover margin in each of their 7 wins and were in the red in their lone loss. How likely is Toledo to recreate their ball hawking ways in 2011? To answer that question, I looked at which MAC teams did the best job of forcing turnovers since 2006, and then how they performed in the following season. It should come as no surprise that Toledo's 27 forced turnovers was easily tops over the past 5 seasons.

If history is any indication (and it usually is), Toledo is in for at least a marginal decline in the number of turnovers they force in 2011. Each of the other high-turnover producing teams forced at least 3 fewer turnovers the next season, and a pair (Kent State and Western Michigan) saw their number drop significantly. Toledo is getting a lot of love as the preseason favorite in the MAC West, and while they should be contenders, sans an unbelievable turnover margin, they are not division's best team.