Just a shade over 2 weeks remain for the start of football season. Here at Statistically Speaking, we are winding down our conference previews. Just 3 more to go after today. To check out last season's WAC projections, follow this link. 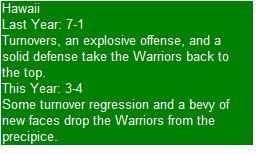 The WAC Going Forward: Who Takes Charge?
In the last preview, I analyzed the Mountain West and where it had been in the previous 12 seasons. This week, I'm analyzing the WAC and where it could be headed from here on out. Boise State, the WAC's strongest program, is now in the Mountain West, and the 3 remaining powers, Fresno State, Hawaii, and Nevada, will be joining them next season. That leaves the WAC with holdovers Idaho, Louisiana Tech, New Mexico State, San Jose State, and Utah State. The WAC will also add Texas-San Antonio and Texas State in 2012, but those programs will be making the transition to IA. In fact, Texas San-Antonio has not even played their first game yet! While both schools are coached by men with a modicum of success in their previous stops (Texas-San Antonio is coached by Larry Coker and Texas State is coached by Dennis Franchione), they will likely struggle in their first few years of IA football. So who among the remaining 5 will assume the role of favorite? Here's how the 5 remaining teams have performed against each other for the past 3 seasons.

Louisiana Tech has been the strongest amongst the remaining 5 teams, losing just twice in the past 3 seasons. Perhaps more impressively, both those defeats came by a combined 3 points, while 7 of their 10 wins have come by double digits.

So it appears Louisiana Tech is the team to beat going forward, but let's dig a little deeper. I went back and calculated SDPI ratings for those 5 teams over the past 3 seasons, but only in games involving each other. Conference games against Boise State, Fresno State, Hawaii, and Nevada get ignored. Instead of the usual tables, we'll use charts this time to track each team's progression. We'll begin with offensive SDPI for the past 3 seasons. 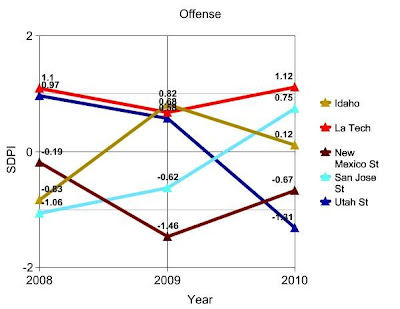 Again Louisiana Tech has been stands out from the other 4. Their offense has played consistently well over the past 3 seasons. Some other interesting tidbits: Idaho enjoyed a sizable offensive jump in 2009 (when they not coincidentally played in a bowl game). Utah State cratered in 2010, going from a very good offense, to the worst among the 5. San Jose State has steadily improved on offense since their awful performance in 2008.

Now let's look at the defenses. 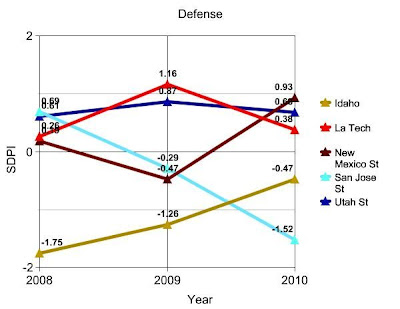 Louisiana Tech has been consistently strong on defense as well, but check out Utah State. one has to wonder how good they could have been in 2010 if their offense didn't struggle. Idaho has started a slow climb out of a deep defensive hole, while San Jose State has gone the other way (good thing they have all their starters back in 2011). New Mexico State struggled when they changed coaches in 2009, but in their second year under DeWayne Walker, they improved a great deal.

So we've looked at offense and defense, not let's examine total SDPI. 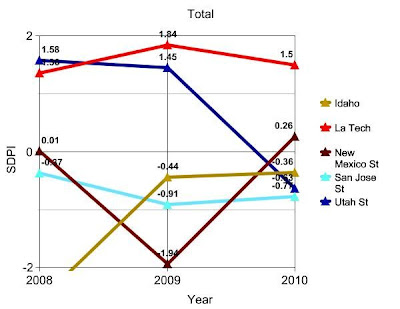 Louisiana Tech has been the only one of the remaining WAC teams to be above-average in each season since 2008. Idaho began their journey off the board, improved and then maintained. New Mexico State imploded, and then rebounded. Utah State played well in 2008 and 2009, but struggled in 2010. Finally, San Jose State has maintained a relatively consistent below average performance.

So, now let's try and answer the question: Who takes charge? It's obvious Louisiana Tech is in the best position to lead the WAC going forward. They have the best record and best track record of recent performance. However, as the charts show, no other team has been consistently strong. There is ample space for a second banana, and it could come from any of the other 4 teams, or perhaps from one of the newbies.

I read you every year and enjoy all your work. This is the first time I didn't follow your reasoning. I can understand a prediction of Nevada going 5-2 in the WAC (though that's close to what I consider a worst case scenario of 4-3). Or FSU at 4-3. Maybe, just maybe even Hawaii at 3-4 but that's also a worst case scenario IMHO. But if FSU and Hawaii are that bad, Nevada won't lose at home to them or LaTech and easily win the WAC. The same applies to the other two. If they win in Nevada they will likely finish better than predicted. I can't see where you find a combined 9 losses for Nevada, Fresno State and Hawii. The other schools are just not that good. I wish the rest of your post had delved into this interesting prediction.

First off, Patrick thanks for visiting, I appreciate the readership.

I'll try and explain the projection system's insight briefly. Basically, it projects no team in the WAC to be terribly good. Nevada was awesome last season (at least on offense), but loses their quarterback and leading rusher from that dynamic offense. Their defense was above-average and returns roughly 7 starters, but doesn't project to be elite.

Meanwhile, Hawaii was also pretty awesome last year, but loses a ton of starters on both sides of the ball and had a ridiculous turnover margin (+13 in WAC play) last season.

Fresno State has not been a statistically elite WAC team for as long as I have been tracking SDPI numbers, so that explains their mediocre prediction.

The other thing the projection system takes into account is the fact that upsets happen all the time. Based on how strongly it predicts each team will be, it runs through the season and gives each team a predicted chance of winning each game (based on Bill James' log 5 formula). Add the predicted totals together and you get the team's predicted overall win total. Since no team is projected to be elite (like Boise), you get a big mish-mash of so-so win totals.

That being said, it would not be a total shock to me if the WAC champions finished 6-1.

Thanks for the reply. I'm obviously a Nevada fan and I appreciate any site that doesn't give the WAC short shrift...yours was one of the few for a few years though now some others have followed suit. The fan in me insists that coach Ault always has a strong QB and excellent RB. In fact I think last year's back Vai Taua was probably the 2nd best back on the team and the RB situation will be better this year. I think the new QB Lantrip will throw as well (or close to it) as Kaepernick. But it's impossible to know how much Kaepernick's running set up the rest of the offense and that was impossible to replace. I agree with you in general. I still expect Nevada, Hawaii or FSU to distance themselves from the rest of the WAC, but with Boise out of the picture it will be an interesting scramble for the WAC title.